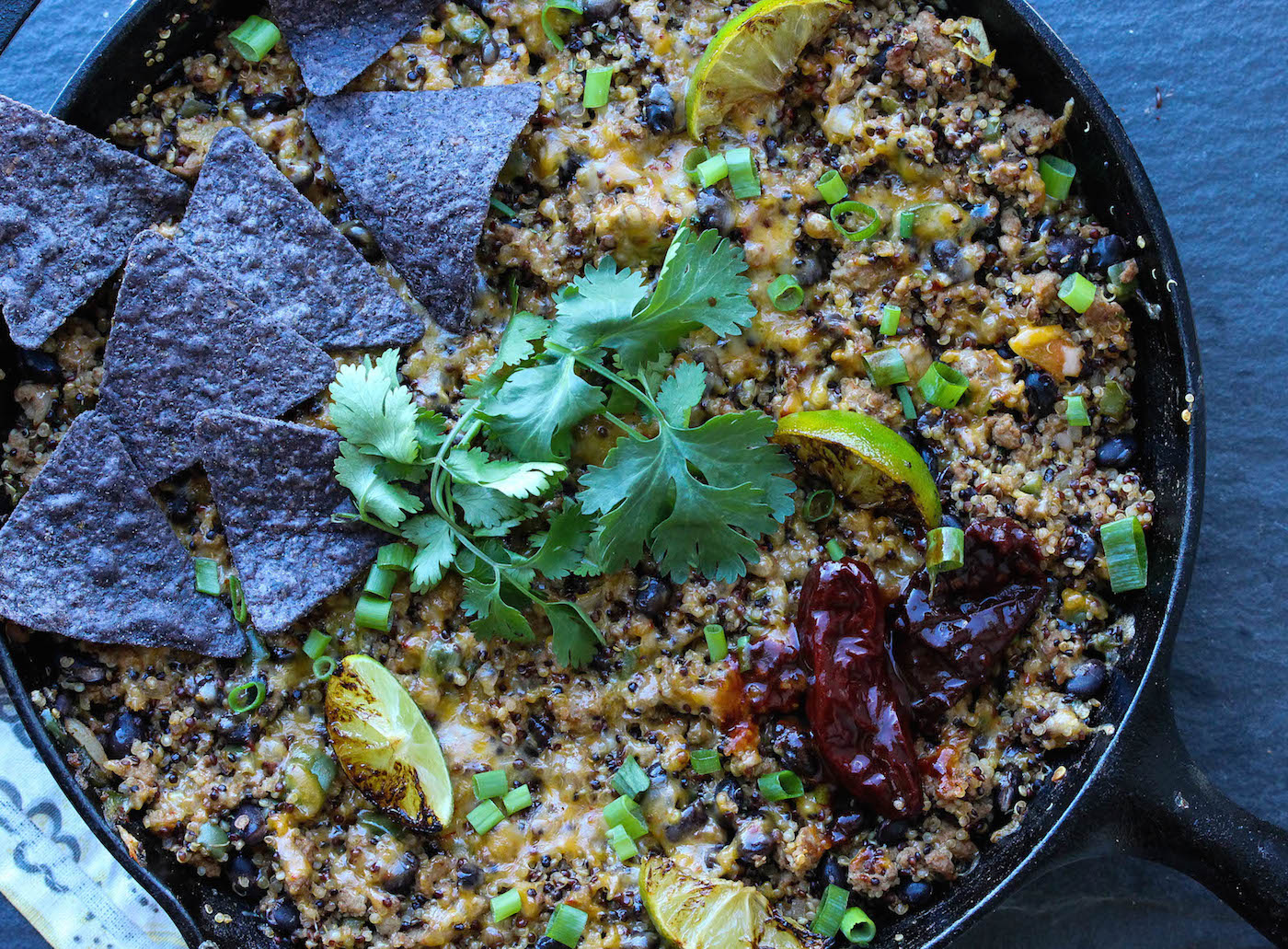 Ground turkey, quinoa, black beans and chipotle peppers simmered in a mix of herbs, spices and lime juice finished off with a layer of melted cheese. The most delicious deconstructed taco that is ready in under 30 minutes!

This is how we do Monday nights! Or taco Tuesdays. Or Friday nights if you’re an 80 year old soul like myself that finds utter enjoyment in cuddling with my dog while watching Netflix. One skillet meals are truthfully just the cherry on top of any night. And they really just make you feel like you’re winning at life. 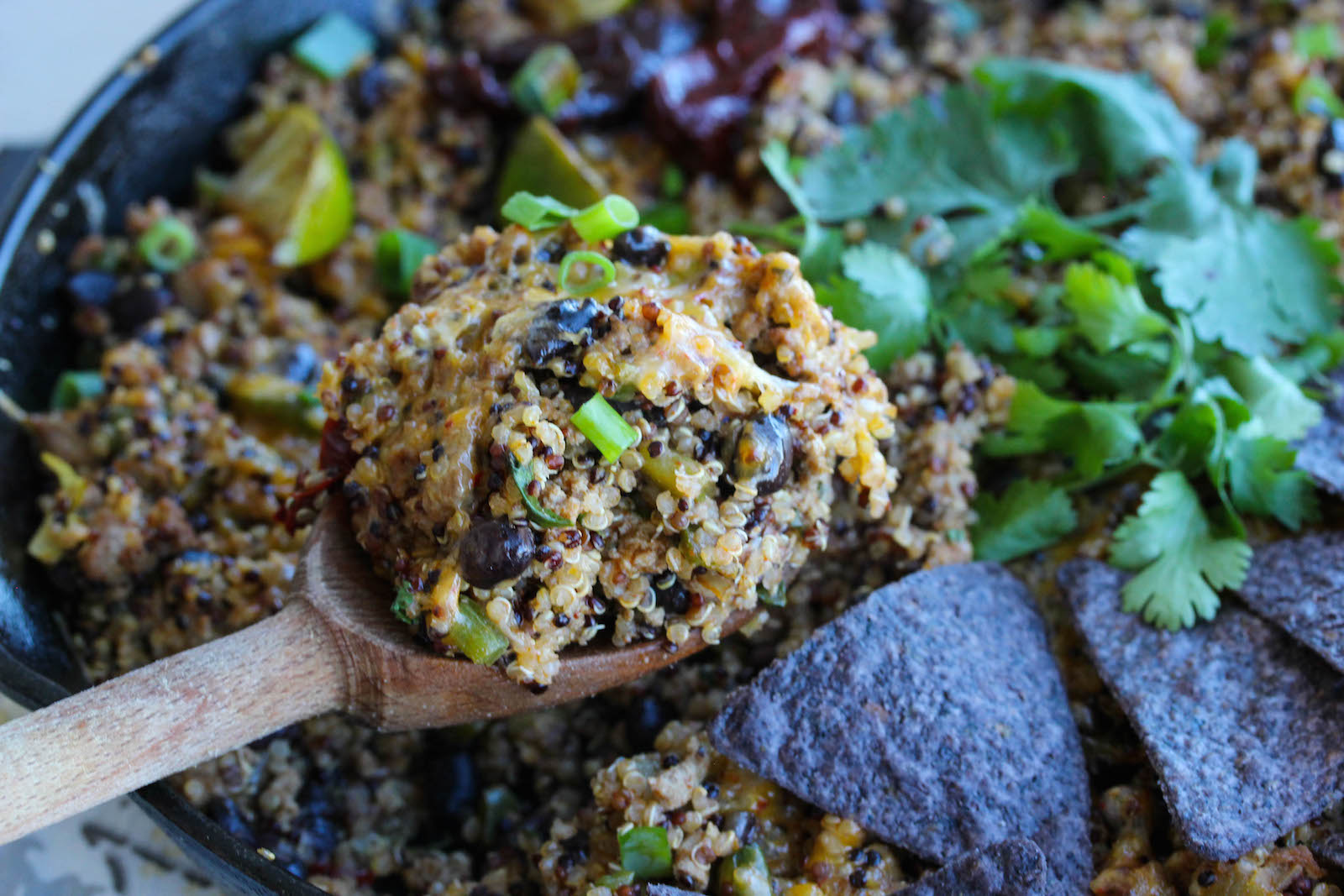 This meal is packed to the rafters with protein and fiber and is relatively low in fat. It’s the perfect meal to make one night for dinner and pack up for lunches the next few days. Not only does the recipe make enough to feed a small army, but it’s a complete meal that maintains its integrity after being reheated. I mean, not many other “tacos” can say that…

There are just SO many things I love about recipe. Tacos already rank up there as one of my go-to meals, mainly because of their versatility, but this whole ‘deconstructed taco’ thing has officially won me over.

The mild heat from the chipotle peppers combined with refreshing cilantro and lime juice makes for the perfect balance of flavors. I loved mixing in some creamy 2% Greek yogurt (in place of sour cream) to give it even more a taco bowl flare. We also really enjoyed eating it as a salad/dip with blue corn tortilla chips!

My fellow texture-lovers know it’s all about that added crunch. 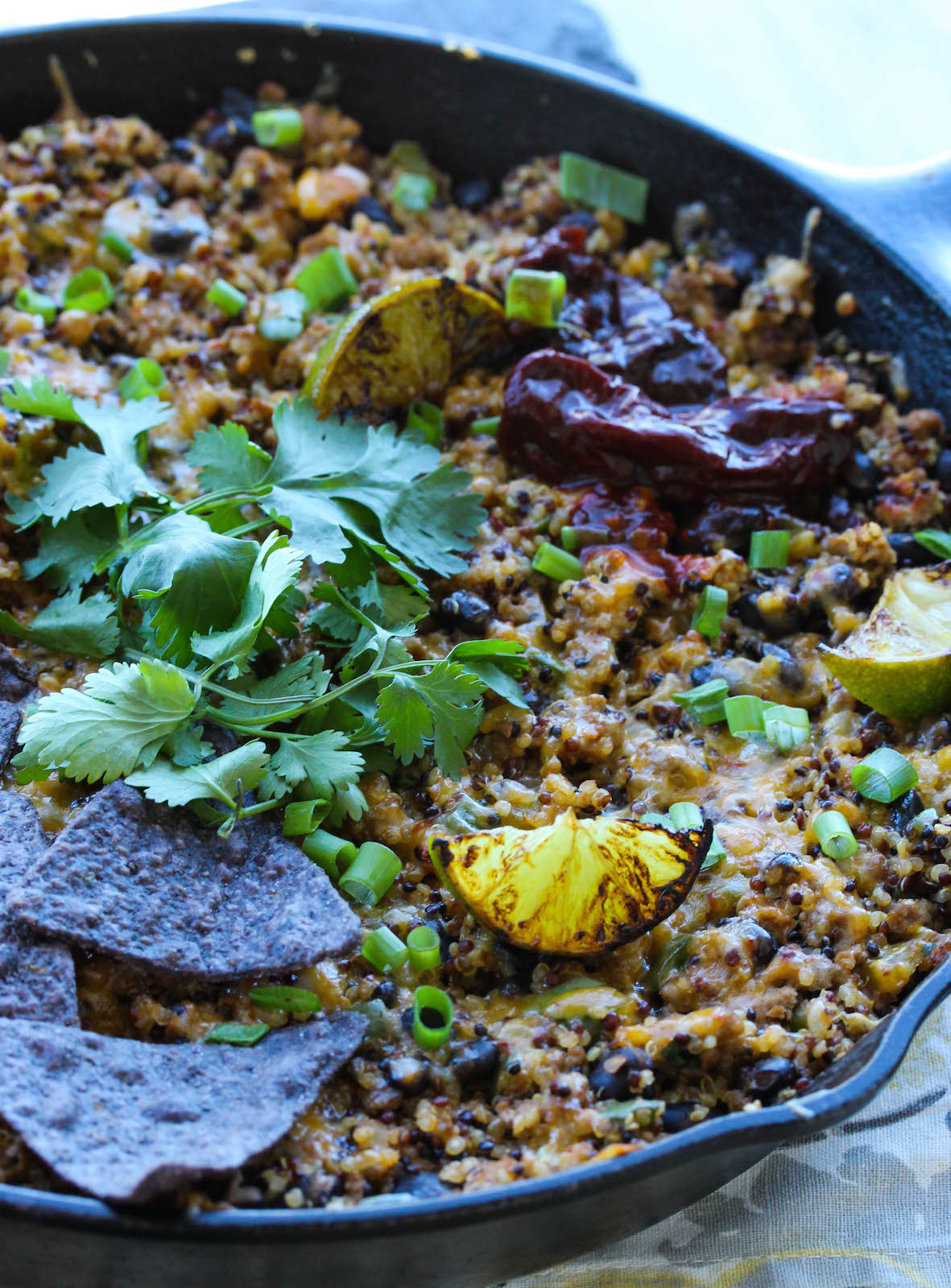 You can also totally add in some avocado but I am having major first world problems over here and am unable to find a decent avocado to save my life. I think I felt up about 20 of them in the grocery store before just saying screw it. Next time I am going after those things Hunger Games style.

Also, sidebar, how is it that Chipotle doesn’t offer quinoa as a grain option yet?? I mean, right?! Sure, everyone loves rice, but KEEN-WAH is the new sheriff in town and just so happens to compliment Mexican flavors gloriously. Who is with me? Let’s start a movement! 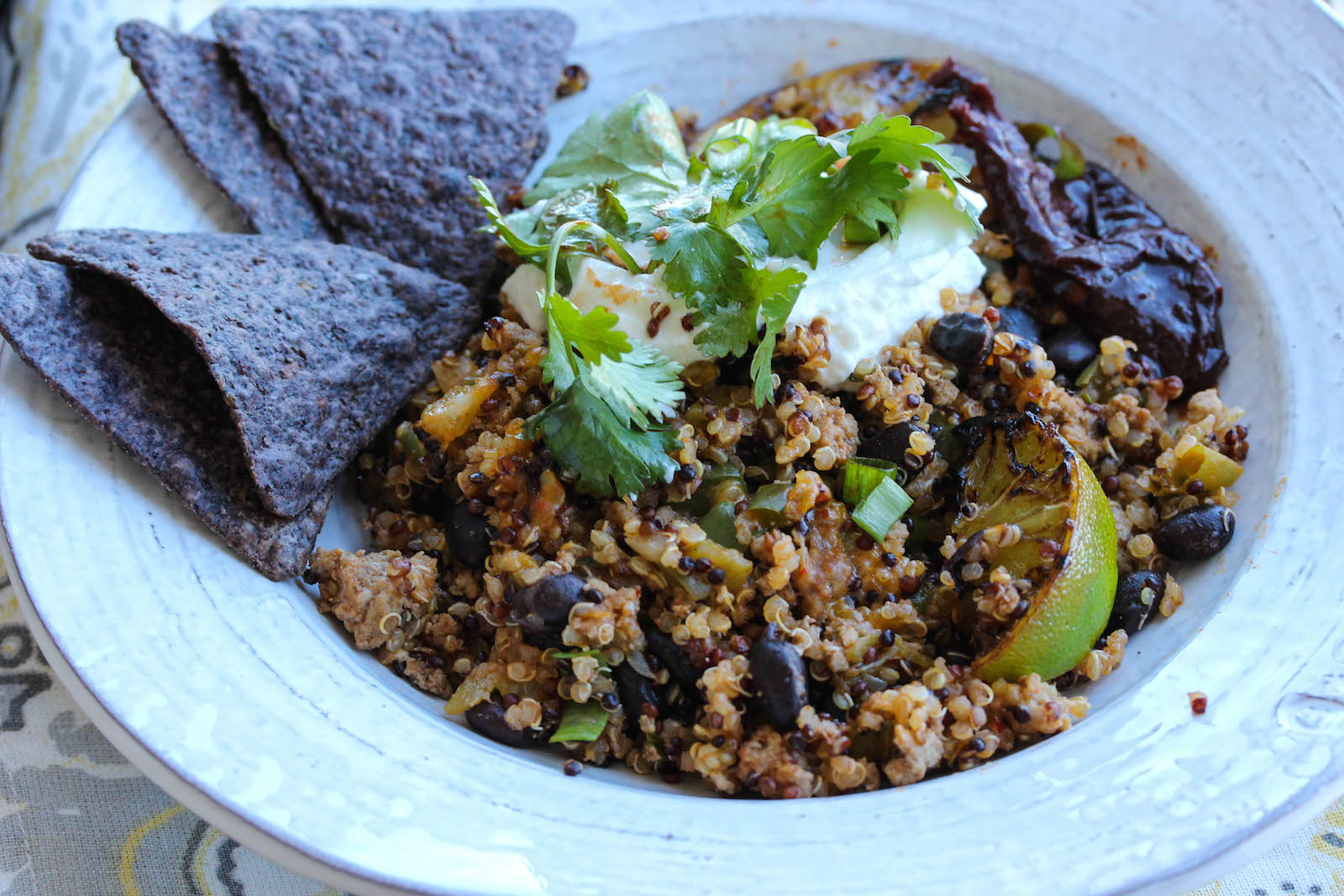 And just to be clear. Just because this meal is healthy does not mean that you can’t include a spicy margarita on the side.

So if you have 30 minutes to spare and you’re in the mood for a total flavor fiesta, this recipe is your ticket! 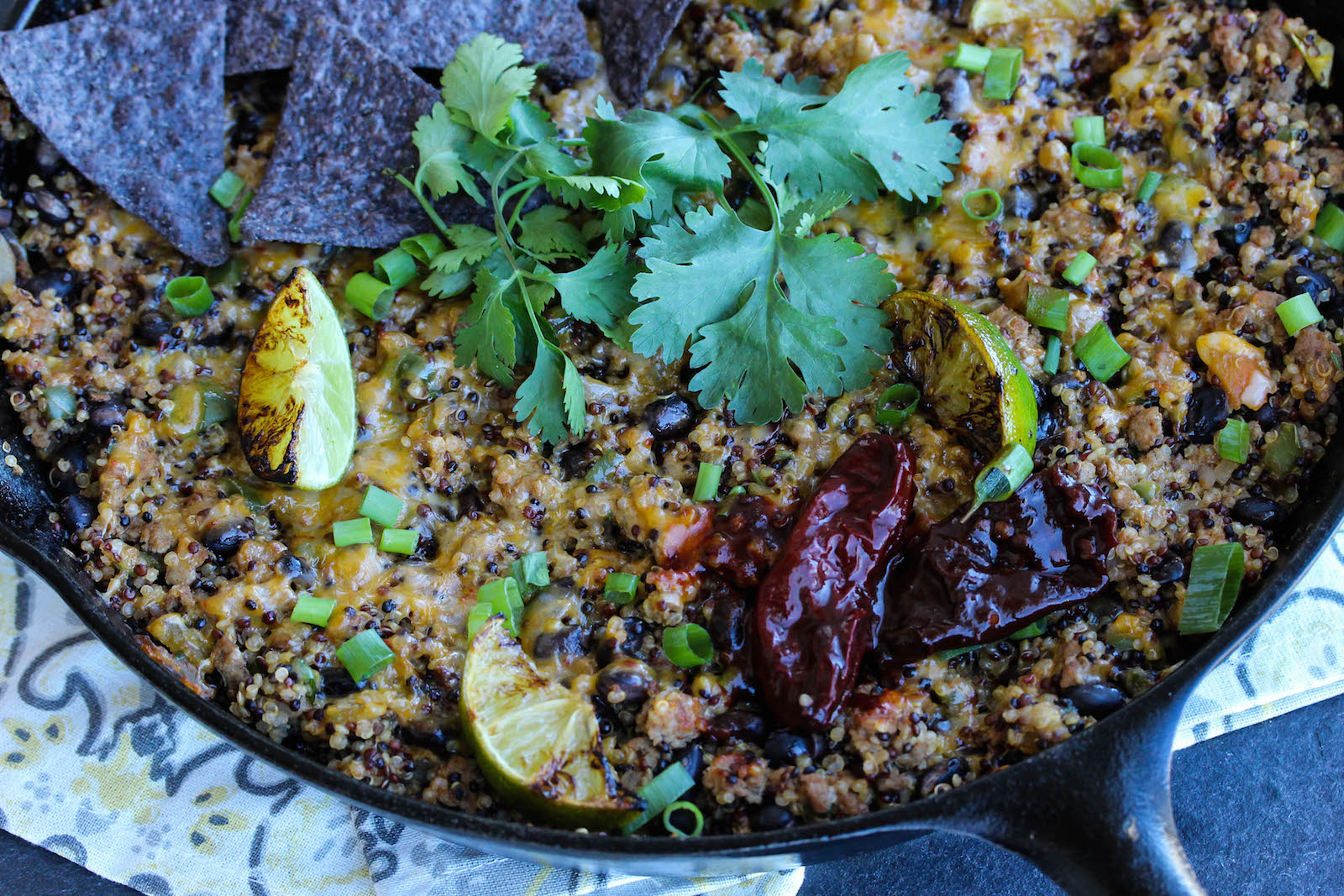 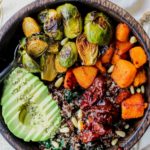 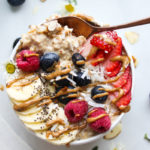